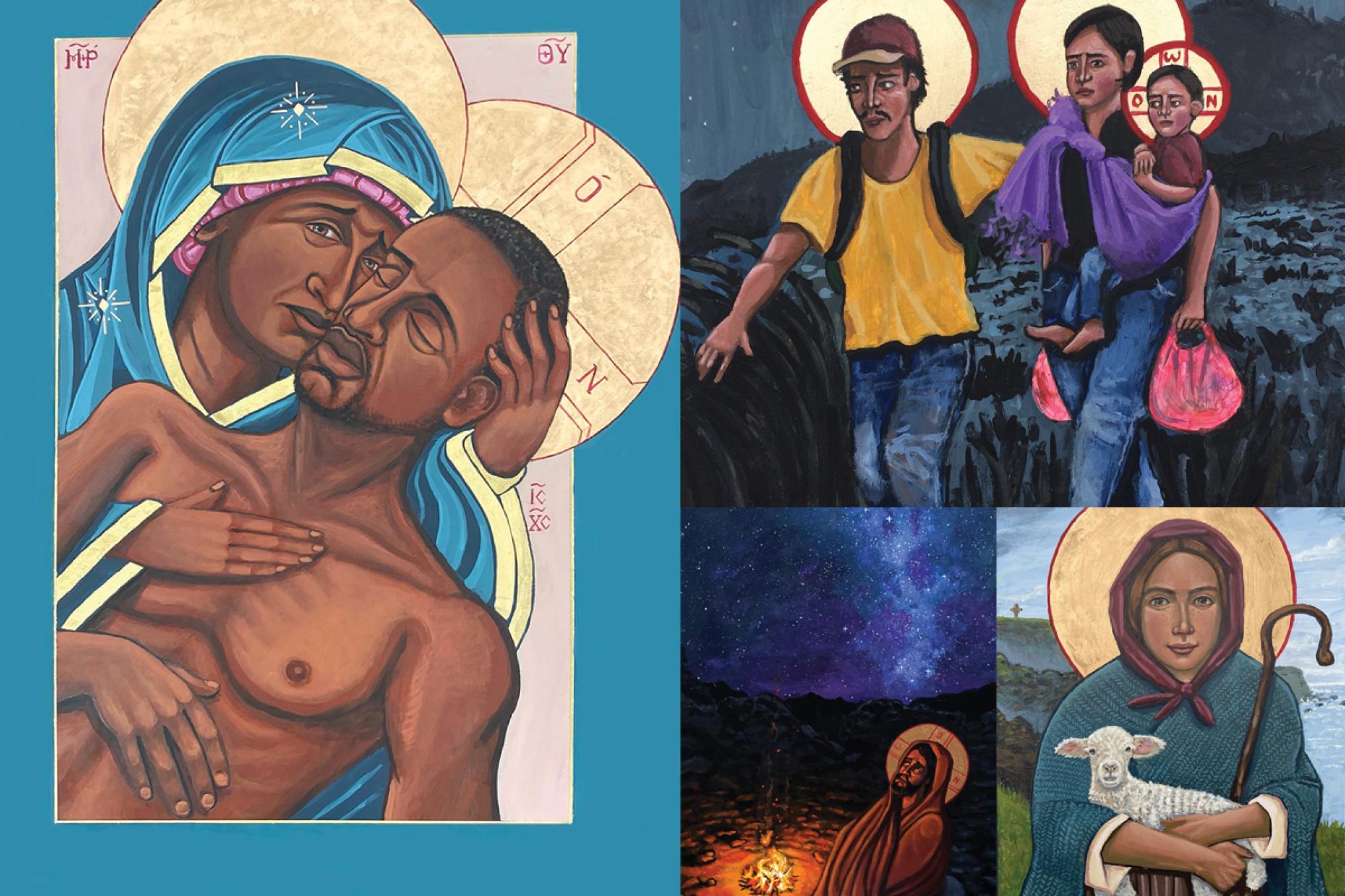 Catholic University unveiled the painting at the conclusion of Columbus Law School’s Black History Month program, according to a university website post.

“Mama” hangs right outside the Mary, Mirror of Justice Chapel in Catholic University’s Columbus School of Law and emulates the renowned “Pieta,” a statue carved by Italian sculptor Michelangelo Buonarroti in 1499 depicting Jesus Christ’s mother, Mary, holding him in her arms after his crucifixion.

Latimore, who lives and works in St. Louis, Missouri, said in an April interview that his painting was commissioned by his partner “as a way to mourn George Floyd.”

A spokesperson for Latimore told The Daily Signal on Monday that the artist was in his studio and unavailable for comment.

“‘Mama’ is done as a pieta,” said the spokesperson, who refrained from specifically stating that the painting depicts Floyd. “A mother with her son of color who was unjustly murdered by the state.”

A video of the ceremony, once posted on the university’s website, became private after The Daily Signal sought comment from the university. Catholic University did not immediately respond to requests for comment on this point. TheDailySignal

During the ceremony, the post said, Law School Dean Stephen Payne recited the poem “Solidarity” by Maya Angelou and reminded those gathered that “diversity is a divine gift we should cherish.” Assistant Dean Shani Butts read “I Dream a World” by poet Langston Hughes.

Latimore has received "Spiritual deninciations" and death threats as a result of the depiction of George Floyd as Jesus. He says that the common question that people ask him was "Is it George Floyd or Jesus", to which he rsponds "yes".

Latimore called this a “nonanswer” and said it “frustrated the hell out of a lot of people.”

2
Processing
Voice note recorded successfully
Record
Recording 00:00
Commenting has been turned off for this post.
Categories
Read More
Politics
Alexa directs 10-yr-old girl to dangerous TikTok ‘outlet challenge’
"Amazon issued an apology this week after one of their voice assistant devices equipped with...
By Maga News 2021-12-29 21:21:46 0 936
Politics
Italy to Make COVID Jab Mandatory for Over-50s
ROME (Reuters) - Italy is set to make COVID-19 vaccination mandatory for people aged 50 and above...
By Maga News 2022-01-05 20:55:27 0 756
Politics
Alleged Antifa member targeted Florida rally with a bomb; more explosives found at his house
A man in black bloc behaving suspiciously near a right-wing rally outside the...
By Maga News 2022-01-08 18:53:18 4 700
Health
High school teacher charged after locking COVID-positive 13-year-old child in trunk to 'quarantine'
HOUSTON (AP) — A Houston mother was charged after authorities allege she placed her...
By Maga News 2022-01-07 22:27:14 1 732
Politics
Trump abruptly ends NPR interview
NPR is reporting that former President Trump abruptly ended an interviewafter being pressed on...
By Maga News 2022-01-13 02:35:45 0 740