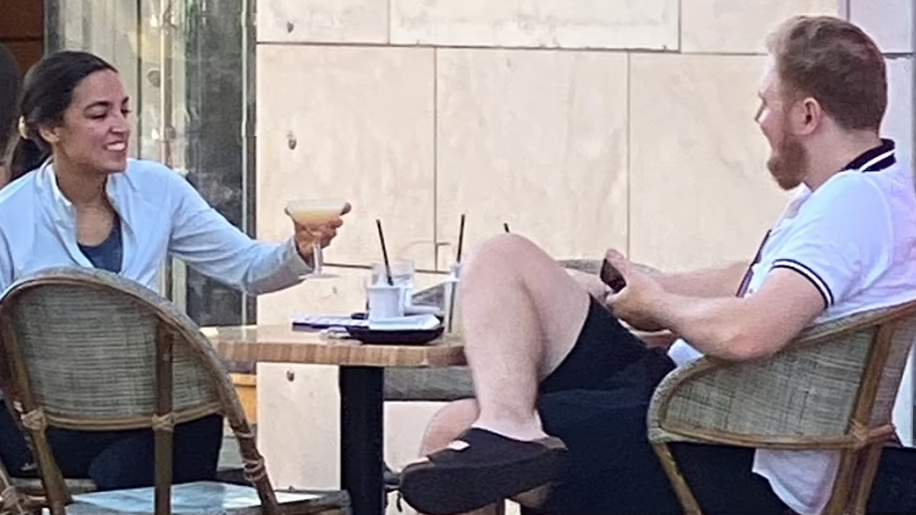 Rep. Alexandria Ocasio-Cortez, the hypocritical face of progressive Democrats in Congress, appeared fine with having a maskless meal in Miami Beach, Florida, on Thursday, despite aggressively supporting mask and vaccine mandates that the state of Florida has left up to individuals to decide for themselves.

The former bartender will enjoy her New Years Eve, via the freedoms offered in the Sunshine State, while her constituents are at home in New York where cases smashed the record for the third day in a row with 76,555 infections in 24 hours and residents wait in line for hours for tests

The 'Squad' member shared a drink and a laugh with an unknown guest at Doraku Sushi and Izakaya, according to photos shared by the National Review.

Ocasio-Cortez was dragged on Twitter by conservatives joking about her strict stance on COVID protocols, including a Twitter account devoted to and endorsed by Republican Governor Ron DeSantis, which invited her to 'enjoy a taste of freedom' in the Sunshine State.

​​”​Welcome to Florida, AOC! We hope you’re enjoying a taste of freedom here in the Sunshine State thanks to @RonDeSantisFL’s leadership,” read a post from late Thursday night.

“​P.S. We recommend the Rock Shrimp Roll and the Aoki Tai the next time you decide to dine in Miami. Cheers!​,” read a follow-up tweet.

In February, Ocasio-Cortez called on Sen. Ted Cruz (R-Texas) to step down after he took his family on a trip to Cancun while Texas was in the throes of a deadly winter storm that knocked out power to millions. “If Sen. Cruz had resigned back in January after helping gin up a violent insurrection that killed several people, he could’ve taken his vacation in peace,” she tweeted ​at the time. “Texans should continue to demand his resignation.”​

When Cruz​ mocked AOC for her comments about the Jan. 6 Capitol riot during a speech at the Conservative Political Action Conference in Orlando, Fla., Ocasio-Cortez shot back. “I don’t care what Cruz said at CPAC, but I do care that it appears Texas was just a layover stop for him between Cancun and Orlando to drop a pack of water into someone’s trunk and abandon his constituents again as they get slammed with $16,000 electrical bills​,”

To most rational-thinking Americans, AOCs "do as I say, not as I do" actions are appalling. Yet kind of expected as the young politician has already learned how to walk the line of hypocrisy by watching the life of the hopefully soon-to-be retiring House Speaker Nancy Pelosi.

How do they do this, they have no fear of God, thus no shame in their double standards.  Lockdowns for the people, whatever they want for themselves.

1
Please log in to like, share and comment!
Search
Categories
Read More
Politics
3,500 kids are in hospital, not 100,000': CDC Director Wallensky corrects liberal Justice Sotomayor's wildly false claim that 'over 100,000 children are seriously ill with COVID, many on ventilators'
CDC Director Rochelle Walensky contradicted Supreme Court Justice Sonia Sotomayor's incorrect...
By Maga News 2022-01-09 16:46:15 2 799
Networking
How To Pass Your Cisco 100-890 Certification Exam On First Try
Are you eager to get your Cisco certification but intimidated by the 100-890 exam? We have good...
By Charlie Scott 2022-09-21 06:13:12 0 29
News
Product Description Services
Does your ecommerce store need product description writing services? Product description is...
By Kerri Colby 2022-09-19 11:08:09 0 11
Home
Here The Top 5 World’s Richest Actor with net worth
People always love to watch movies and their favourite actors. This entertainment industry has...
By Trend To Review 2022-09-20 09:11:05 0 26
Politics
Don Jr. and Ivanka Fire Back after Subpoena, Say They WILL NOT COMPLY
After New York Attorney General Letitia James subpoenaed Donald Trump Jr. and Ivanka Trump during...
By Maga News 2022-01-03 22:14:35 1 708