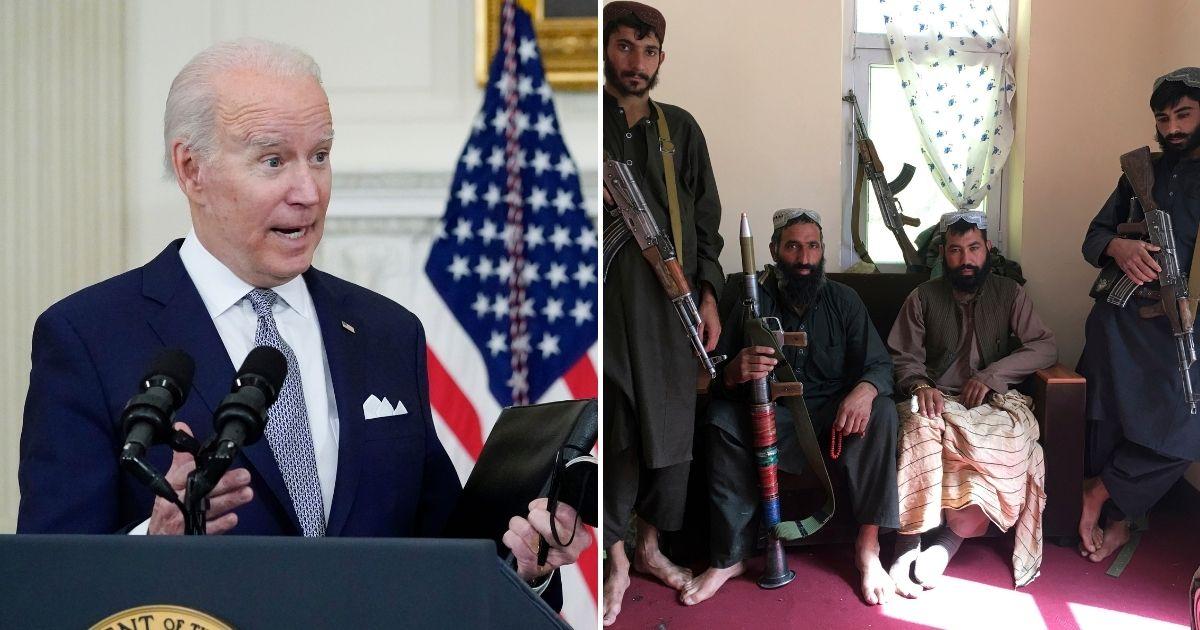 Remember how, after the fall of Kabul, we were promised Taliban 2.0? It was going to be a softer, gentler theocracy — one which was going to include a multitude of voices in government and which definitely wouldn’t be embracing terrorism like it did during its first tenure running the country of Afghanistan.

Yes, well, about that: A report states the group, currently the de facto government of Afghanistan, has now threatened to send 2,000 suicide bombers to Washington, D.C. And yet, there’s nary a peep out of President Joe Biden’s administration.

It’s not that we couldn’t have seen this coming. Since the Biden administration’s capitulation in Afghanistan this summer, the Taliban has made it clear through their actions they’re still the same extremists they were when we chased them from power. The Western Journal has been bringing readers the truth about just how bad the situation in Afghanistan is — and why the president is directly responsible. WesternJournal

The Taliban telegraphed the warning to U.S. leaders during ongoing talks in Doha, Qatar, according to a report by the Middle East Media Research Institute (MEMRI), a watchdog group that tracks jihadi communications and media reports. The Taliban objects to any U.S. presence in Afghanistan since the Biden administration last year removed all Americans in a bungled withdrawal that left several service members dead. If the United States does send its military back into the country, the Taliban says it will respond by sending a brigade of suicide bombers to the Afghan embassy in Washington.

The Taliban also intends to enlist suicide bombers as part of a new branch of special forces in the Afghan National Army.

"Our mujahideen in the Ishtishhadi Kandaks [martyrdom-seeking battalions] will be part of the army and [they] will be Special Forces and organized under the defense ministry," Zabihullah Mujahid, a veteran terrorist and leader in the Taliban government, said in a recent interview, according to MEMRI. "The Special Forces will be established in a specific number and used for special operations."

The comments are yet another sign that the Taliban does not intend on moderating its behavior since it retook power in Afghanistan. The Taliban government is not internationally recognized, though the United States is engaging with the group through diplomatic channels.  FreeBeacon

2
Most Recent
Top Comments
Processing
Voice note recorded successfully
Record
Recording 00:00
Commenting has been turned off for this post.
Categories
Read More
News
Supreme Court To Hear Lawsuit Over Football Coach Fired For Praying On Field. Was’ Just giving thanks to God’
As the United States struggles through Joe Biden's failing presidency, the idea that "elections...
By Eric Thompson 2022-01-19 23:57:45 1 735
Politics
As California Descends Into Chaos Terrified Beverly Hills Elites are Flooding the Cities Only Gun Store
The home-security industry is booming in Beverly Hills, California, thanks to the frightening...
By Maga News 2021-12-31 17:21:36 0 736
Politics
CNN on Biden’s Approval: ‘Really, Really, Really Bad Number’
CNN was forced to admit on Friday that President Joe Biden’s approval rating is...
By Eric Thompson 2022-04-16 16:40:26 17 397
Politics
US science teacher arrested for vaccinating 17-year-old student
A New York school teacher with no formal medical qualification has been arrested for allegedly...
By Maga News 2022-01-05 20:28:29 0 637
Politics
Covid Test Shortage Causes ER Panic in DC
Two things are undoubtedly true in Washington, D.C.: 1. Many people are scared of the omicron...
By Maga News 2021-12-31 19:55:31 0 720