Queen cuts Andrew adrift: Duke of York is stripped of ALL his military titles and royal patronages, will no longer use HRH in official capacity and is told he will have to face sex assault lawsuit as a 'private citizen' 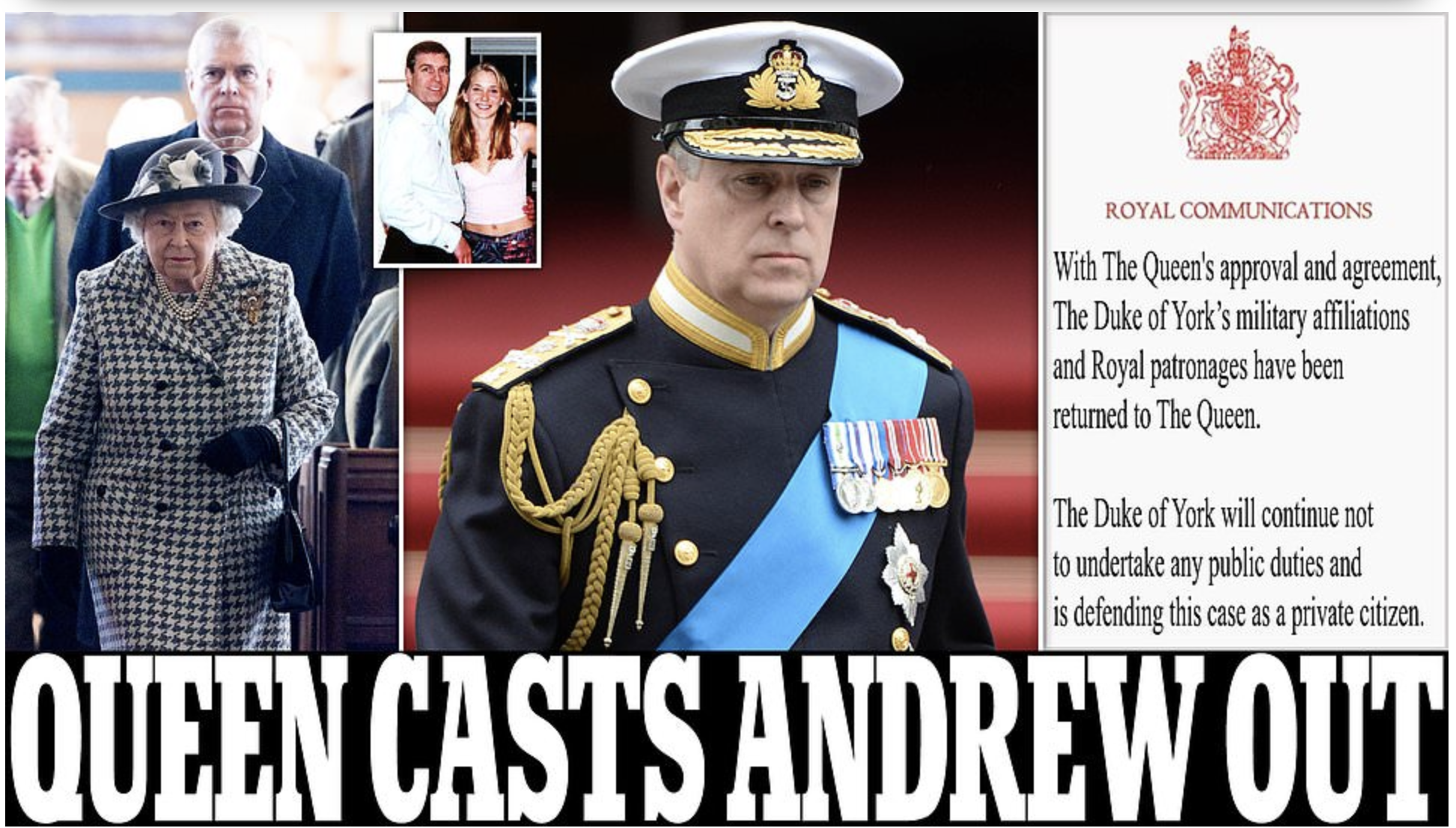 Prince Andrew was today stripped of his military titles, royal patronages and HRH honorific by the Queen, who said he will have to face his sexual assault lawsuit as a 'private citizen'.

The Duke of York was born an HRH but will no longer be allowed to use it in any capacity, signalling his mother's attempt to distance the Royal Family from the ninth in line to the throne as he faces a humiliating trial in the US.

The decision to shred Andrew's military ties is likely to be particularly painful for the Royal Navy veteran, who served with distinction as a helicopter pilot during the Falklands War.

It comes after a day after a US judge unequivocally rejected the prince's bid to have his sex abuse case thrown out, leaving him facing the prospect of being cross-examined for seven hours on camera with embarrassing questions on everything from his sex life and 'private parts'.

Andrew has been urged to settle out of court with his accuser royal's accuser Virginia Roberts Giuffre 'for the sake of his mother', who celebrates her Platinum Jubilee this year. But he could face difficulties given Ms Giuffre is said to be pushing for 'her day in court'.

Buckingham Palace announced the Queen's decision to cast Andrew out of the royal fold in a statement released this afternoon.

'With The Queen's approval and agreement, The Duke of York's military affiliations and Royal patronages have been returned to The Queen,' it read. 'The Duke of York will continue not to undertake any public duties and is defending this case as a private citizen.'

The Palace said previously that the duke's military appointments were in abeyance after he stepped down from public duties in 2019. But, prior to today, he still retained the roles, including the position of Colonel of the Grenadier Guards, one of the oldest and most emblematic regiments in the British Army.

It comes after more than 150 veterans joined forces to express their outrage, writing to the Queen to demand Andrew was removed from the honorary military positions.

Accusing the duke of bringing the services he is associated with into disrepute, the 152 former members of the Royal Navy, RAF and Army said that 'were this any other senior military officer it is inconceivable that he would still be in post'. The Queen is head of the armed forces and honorary military appointments are in her gift. TheDailyMail

Andrew is currently waiting on tenterhooks for a judge to decide whether his rape accuser Virginia Roberts Giuffre's civil lawsuit will be ditched.

And in the meantime, it is believed he is having to raise funds to pay for the ongoing legal battle, with Wills and Charles both reportedly adamant the Queen should not bail him out.

A source told the Mirror: “They are both of the opinion that Andrew can sort out his own mess.”

Prince Andrew has always fiercely denied the allegations against him.

If the lawsuit goes ahead, he will face a full civil trial in New York over claims he sexually abused Ms Giuffre on three occasions in 2001 when she was 17.

But insiders have claimed he could try to settle the lawsuit out of court if it goes to trial, with his lawyers keeping the settlement option "on the table" due to the negative impact a court case could have on other senior royals.

2
Processing
Voice note recorded successfully
Record
Recording 00:00
Commenting has been turned off for this post.
Categories
Read More
Politics
Jen Psaki Says Peter Doocy Sounds Like A “Stupid Son Of A B**ch”
White House Press Secretary Jen Psaki is not exactly professional in her approach to the job. We...
By Eric Thompson 2022-04-16 17:01:36 2 501
News
Supreme Court To Hear Lawsuit Over Football Coach Fired For Praying On Field. Was’ Just giving thanks to God’
As the United States struggles through Joe Biden's failing presidency, the idea that "elections...
By Eric Thompson 2022-01-19 23:57:45 1 736
Politics
Catholic University Hangs Painting Of George Floyd As Jesus Christ
Catholic University unveiled the painting at the conclusion of Columbus Law School’s Black...
By Maga News 2021-12-30 20:59:13 0 528
Politics
New York Dept. of Health Prioritizes People of Color for Covid-19 Therapy
This week, the New York Department of Health published an announcement to health care providers...
By Maga News 2021-12-31 19:20:33 2 640
Politics
Scottish Newspaper Asks Readers if ‘COVID Internment Camps’ Should be Introduced
One of Scotland’s largest newspapers is asking its readers if the country should follow...
By Maga News 2022-01-05 21:31:06 0 522