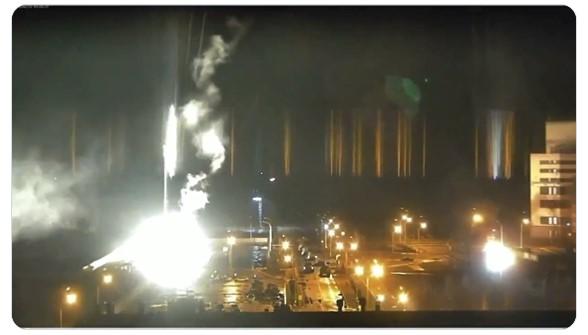 The media has been covering Russia's invasion of Ukraine, 24 hours a day, for almost a week.

Social media is full of conflicting stories, some videos from other conflicts attributed to this conflict, and photos showing the growing destruction of life and property.

The world has universally called for Putin to stop the invasion while praising the valiant Ukrainians fighting against the much larger and more powerful Russian military.

In what looks like Russian President Vladimir Putin's attempt to bring the Ukrainian government to its knees, Ukrainian foreign minister Dmytro Kuleba announced on Thursday, that the “Russian army is firing from all sides upon Zaporizhzhia NPP” — the largest nuclear power plant in Europe. “Fire has already broke out. If it blows up, it will be 10 times larger than Chornobyl! Russians must IMMEDIATELY cease the fire, allow firefighters, establish a security zone!”

According to a statement from the White House, President Biden spoke with Ukrainian President Volodymyr Zelensky on Thursday evening to receive an update on the fire at the facility.

President Joseph R. Biden, Jr. spoke with President Volodymyr Zelenskyy of Ukraine this evening to receive an update on the fire at the Zaporizhzhia Nuclear Power Plant. President Biden joined President Zelenskyy in urging Russia to cease its military activities in the area and allow firefighters and emergency responders to access the site.

President Biden also spoke this evening with Under Secretary for Nuclear Security of the U.S. Department of Energy and Administrator of the National Nuclear Security Administration (NNSA) Jill Hruby to receive an update on the situation at the plant. The President will continue to be briefed regularly.

The shelling of the nuclear plant follows failed talks between Ukrainian and Russian officials, according to The Wall Street Journal:

The fire at the nuclear power plant comes after Moscow deepened its military offensive in southern Ukraine, penetrating the city of Kherson as Russian and Ukrainian negotiators agreed to establish “humanitarian corridors” to allow civilians to leave besieged cities.

Negotiators, however, failed to reach any agreement on an overall cease-fire, and Russian President Vladimir Putin signaled that he is determined to continue the war. Russian forces Thursday continued pounding residential districts in Kharkiv, Ukraine’s second-largest city, and Chernihiv in the north. Moscow also conducted airstrikes on the capital, Kyiv, and several Russian warships appeared near the southern port city of Odessa in what Ukrainian officials said could be the opening stages of an amphibious assault.

The International Atomic Energy Agency (IAEA) tweeted they were “aware of reports of shelling” at Zaporizhzhia and are “in contact with Ukrainian authorities” about the situation.

The Associated Press reported that one of the facility’s six reactors has been set ablaze by the shelling:

Plant spokesman Andriy Tuz told Ukrainian television that shells were falling directly on the Zaporizhzhia plant in the city of Enerhodar and had set fire to one of the facility’s six reactors. That reactor is under renovation and not operating, but there is nuclear fuel inside, he said.

Hopefully, the world wakes up soon and realizes that Vladimir Putin, as the wealthiest person on Earth, and whose ego has to be fed on a regular basis, will personally not be affected by sanctions against Russia and that the Kremlin's desire to rebuild the former USSR is resolute.

Following a year of the Biden administration slashing America's energy output, the United States citizens would take the brunt of the congress if successful in getting Joe to stop the daily imports of 650,000 barrels of Russian oil, possibly leading to $7 per gallon pricing.

What then, we start buying more Iranian oil, a verbal enemy of the US and Israel?

Save Up To 66% On MyPillow Products – Use Promo Code ETTALK

PureTalk - Save Big Money On Your Cell Phone Bill

2
Most Recent
Top Comments
Processing
Voice note recorded successfully
Record
Recording 00:00
Commenting has been turned off for this post.
Categories
Read More
News
Supreme Court To Hear Lawsuit Over Football Coach Fired For Praying On Field. Was’ Just giving thanks to God’
As the United States struggles through Joe Biden's failing presidency, the idea that "elections...
By Eric Thompson 2022-01-19 23:57:45 1 736
News
A Millionaire/ Billionaire's life without us.
A Millionaire/ Billionaire's Life Without us How did they get where they are today. It had to...
By Deborah Chezem 2021-11-25 04:45:55 5 626
Politics
Italy to Make COVID Jab Mandatory for Over-50s
ROME (Reuters) - Italy is set to make COVID-19 vaccination mandatory for people aged 50 and above...
By Maga News 2022-01-05 20:55:27 0 758
Politics
Navy training goes woke: Boot camp to include classes on suicide prevention, hazing, racism and sexual assault after numerous crisis over past number of years
The US Navy said it was expanding it's eight-week boot camp program to include two more weeks of...
By Maga News 2022-01-09 21:47:20 1 918
Politics
Trump abruptly ends NPR interview
NPR is reporting that former President Trump abruptly ended an interviewafter being pressed on...
By Maga News 2022-01-13 02:35:45 0 741